Just a quick update to point you in the direction of an interview I did with Gerry Anderson fansite Sequential 21, talking about writing the new Terrahawks comics for the Spectrum anthology.

I talk about my history with Gerry Anderson’s TV shows, my love of Terrahawks in particular and get into some non-spoilery nitty gritty about coming up with new stories for these beloved characters.

You can read the interview here: https://sequentialtwentyone.wordpress.com/2022/07/29/sequential-21-interviews-spectrums-dan-whitehead/

The article is based on original documents, letters and clippings from the Burgess Foundation, and includes a wonderful image of Burgess’ own paperback edition of Clockwork Orange from 1972, with the famous David Pelham minimalist cover, defaced by the author himself.

If you can buy a copy from a Big Issue North vendor, please do. Vendors are all homeless or vulnerably housed and every copy sold puts money directly in their pocket, and enables Big Life Trust to help them rebuild their lives. You can find your nearest vendor here.

However, the magazine is also available in select supermarkets such as Co-op, and digital copies are available direct from Issuu.

Would you like to see my face this year? My actual real life face? In actual real life? These are the currently confirmed conventions where you’ll be able to find me for the rest of 2022…

I’m thrilled to announce that Closed Hands, the interactive fiction project I worked on as part of games collective Passenger, has been nominated for the Excellence in Narrative award at the Independent Games Festival 2022.

You can find out more about Closed Hands here. 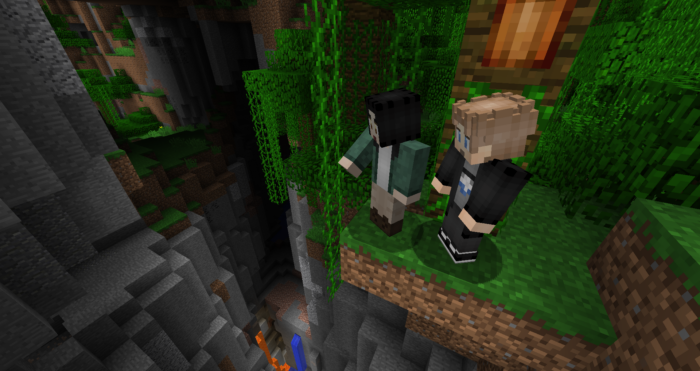 This is something I’ve been itching to share with the world. For the last year I’ve been working with renowned educational publisher Collins (part of HarperCollins) on a series of six official Minecraft workbooks for primary school children.

Each one features reading and writing tasks in line with the National Curriculum, aimed at ages 5 to 11. My contribution has been to weave an authentic Minecraft story through each book, incorporating these tasks, so kids feel like they’re joining our characters on an actual adventure rather than just doing homework.

Each book has been written in conjunction with Minecraft developer Mojang to ensure everything that happens makes sense within the world of the game, and as the books become more advanced so do the stories and adventures, culminating in a quest to defeat the mighty Ender Dragon.

The books are on sale from November 4th priced just £4.99. You can get them via Amazon or direct from Collins here.

I’ll be attending the always-wonderful Thought Bubble comic convention on November 13th and 14th, where my new graphic novel Hex Loader will be making its public debut. I’ll also have copies of most of my other comics work for sale.

Thought Bubble takes place at the Harrogate Convention Centre and if you have tickets for last year’s cancelled event, it’s still valid this year. If not, you can buy tickets here.

I’ll be on Table 54 in the Comixology Originals hall. Hopefully I’ll see you there!

You’ve still got a couple of weeks to back my new graphic novel, Hex Loader, on Kickstarter.

Hex Loader is a coming of age story about a young man, far outside his comfort zone and forced to define himself for the first time. It’s a rumination on practical magic, the messy nature of creativity and the compromises we make along the way. It’s a love letter to 1980s computer games, Vertigo comics and underground counter-culture.

And it’s a comic about old friends, new friends, occult code, skeleton monsters and an imaginary wombat with a really big machine gun.

Some of you may have seen the earlier issues of Hex Loader (three were published between 2016 and 2018) but this complete edition concludes the story with those three chapters plus over 60 more pages of new material.

As well as the 152-page book in physical or digital form, all backers will also receive a bonus retro ZX Spectrum game based on the story! This is an actual Spectrum game, and can only be played on an emulator (included with the game) or by copying it to audio tape and loading it on authentic Sinclair hardware like the old days!

The campaign has already met its funding target, the pages are all complete and being lettered, so it’s only a matter of time before it’s ready for your eager eyes.

Pleased to say I’ll be a guest at Stretford Comic Fest on Saturday 9 October, 2021. It’s free entry, organised by the fine folks from Wow Comix, and takes place at the Stretford Mall. Come along, meet some cool comic creators, pick up some books and do your weekend shop at the same time!

Fantastic website Horrified has released a suitably autumnal anthology of folk horror tales, and I’m thrilled to say that one of mine – Root, Branch and Thorn – is one of them.

It’s an ebook, and can be purchased for £4.99 directly from Horrified’s online shop.

Here’s a taste of my story, in which a scheming politician’s high speed rail line comes up against the immovable forces of nature…

CLOSED HANDS, the interactive fiction game I worked on with Passenger Games, is now available in a deluxe edition on Steam. The game will continue to be available on Itch.io on a pay-what-you-want basis, but the Steam version comes with extras such as commentary from game director Dan Hett, a digital copy of the soundtrack, an ebook of the story and more.

CLOSED HANDS is a groundbreaking work of interactive fiction by PASSENGER, directed by Dan Hett. The game follows the deep intertwined stories of five people thrown together by their involvement in a fictional terror attack.

This sprawling story plays out through a combination of traditional interactive text, as well as explorable computer interfaces, conversations, IM’s, phonecalls and more. CLOSED HANDS is a fragmented and complex narrative, playable in any order, that tells the story of the lead-up and aftermath of the attack: some stories go forward in time, some backwards, and some both. Players can choose to follow a single narrative arc, or jump between perspectives to get the full picture of everything that happens to the city, and it’s inhabitants.

You can buy CLOSED HANDS here.